An Attitude of Gratitude

I'm a big believer in growth. Life is not about achievement, it's about learning and growth, and developing qualities like compassion, patience, perseverance, love, and joy, and so forth. And so if that is the case, then I think our goals should include something which stretches us.
Attitde challenge happiness Importance kahani life motivation NoteBook Office office story productivity ProTip Question quotes Random Thoughts story True Uncategorized wisdom wise

“We have to search for available opportunities which are sometimes hidden, but within our reach.”

This is a story of a South African farmer, who had extensive farmland in a rural area. His ambition was to become a billionaire. He believed that he would not be able to fulfill his dream by farming in a village. In fact, he made use of only a small part of his farmland and a lions share of it was lying uncultivated. He decided to sell his property in the village and move to the town, so that he could engage in a business and fulfill his ambition to become a billionaire.

The man who bought this farmland, ‘I will work hard on this land, and convert every inch of it into agricultural land, and earn my livelihood.’ He started work on the very first day, he leveled the land and ploughed the land tirelessly. One day while ploughing, he noticed what looked like a few pieces of shining rocks. A closer look convinced him that those were actually diamonds. A deeper study revealed that there were huge deposits of diamonds underneath his land. Eventually he became a billionaire!

While some people may see an element of luck in this story, but in my opinion, it was the hard work put in by second farmer, which brought him the fortune.

As human being we have a tendency to believe that ‘The grass is greener on the other side.’ Most often we fail to notice that grass in our own backyard is as green, if not greener than the other. If we are ready to change our attitude, success will be ours.

In ancient times, a king had a boulder placed on a roadway. Then he hid himself and watched to see if anyone would remove the huge rock.

Some of the king’s wealthiest merchants and courtiers came by and simply walked around it. Many loudly blamed the king for not keeping the roads clear, but none did anything about getting the stone out of the way. Then a peasant came along carrying a load of vegetables. Upon approaching the boulder, the peasant laid down his burden and tried to move the stone to the side of the road. After much pushing and straining, he finally succeeded.

After the peasant picked up his load of vegetables, he noticed a purse laying in the road where the boulder had been. The purse contained many gold coins and a note from the king indicating that the gold was for the person who removed the boulder from the roadway.

The peasant learned what many of us never understand –
Every obstacle presents an opportunity to improve our condition. 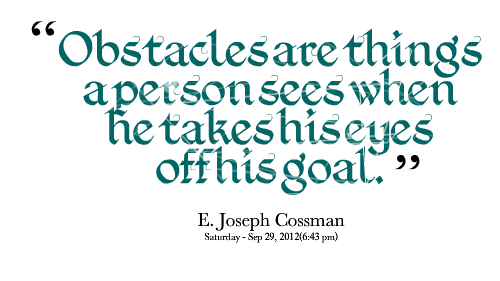