An Attitude of Gratitude

I'm a big believer in growth. Life is not about achievement, it's about learning and growth, and developing qualities like compassion, patience, perseverance, love, and joy, and so forth. And so if that is the case, then I think our goals should include something which stretches us.
Attitde challenge happiness Importance kahani life motivation NoteBook Office office story productivity ProTip Question quotes Random Thoughts story True Uncategorized wisdom wise 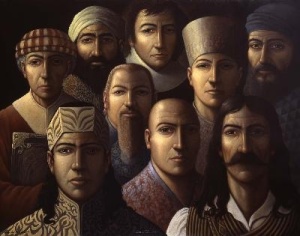 This theory alleges that a secret society was founded by the Mauryan Emperor Ashoka around 270 BC to protect and develop knowledge that if falls into the wrong hands would be dangerous for the humanity and that nine unknown men were entrusted with protecting the nine books of secret knowledge. The nine books entrusted to these nine men is said to contain information on topics ranging from psychological warfare, physiology, microbiology, alchemy, communication including communication with extraterrestrials, gravity and anti-gravity devices, cosmology including hyperspace and time travel, light and sociology.

H.G. Wells, in his abridged version of his Outline of World History wrote:

Among the tens of thousands of names of monarchs accumulated in the files of history, the name of Asoka shines almost alone, like a star.

It is said that the Emperor Asoka, aware of the horrors of war, wished to forbid men ever to put their intelligence to evil uses. During his reign natural science, past and present, was vowed to secrecy. Henceforward, and for the next 2,000 years, all researches, ranging from the structure of matter to the techniques employed in collective psychology, were to be hidden behind the mystical mask of a people commonly believed to be exclusively concerned with ecstasy and supernatural phenomena. Asoka founded the most powerful secret society on earth: that of the Nine Unknown Men.